The forgotten soldiers from the Battle of Jadotville, including those from Roscommon, should be recognised for their leadership and bravery by the awarding of medals which is long overdue.

Thats according to Fianna Fail TD Deputy Eugene Murphy who was speaking last week following a presentation in Leinster House by retired Commandant Leo Quinlan on the ‘unfinished business’ of the Siege of Jadotville.

Deputy Murphy pointed out that a number of soldiers who fought in Jadotville were from the Boyle, Elphin and other areas of North Roscommon. “Private Danny ‘Boy’ Regan, Corporal Christopher Roche, Sergeant George Tiernan, Corporal Sean Tiernan, Private Donal Manley and Private Michael Tighe- these are the Roscommon Jadotville soldiers whose memory deserves to be honoured and medals for leadership and bravery should now be awarded as recommended by their Commanding Officer Commandant Pat Quinlan. Now is the time to right this wrong and to bring closure to the Jadotville affair,” said Deputy Murphy.

The Battle of Jadotville took place in the breakaway province of Katanga in the Congo in September 1961. This battle is the biggest battle the modern Irish Army has carried out alone against a foreign enemy. It involved 155 Irish soldiers in conflict with 3500 better armed, more experienced troops of the Katanga Army. The Irish Company (“A” Company, 35th Infantry Battalion) suffered 4 wounded while the enemy suffered 300 dead and 750 wounded. A campaign for recognition of this historical event was ignored since 1961 until recent years.

In June 1961 Commandant Pat Quinlan arrived in the Congo with his Company (“A” Coy) which was part of the 35th Irish Battalion which was sent on a 6 month mission to keep the peace in Katanga.

“Comdt Quinlan recommended a number of his Officer and Men for medals for leadership and bravery arising from the Battle of Jadotville. An Army medal board sat in 1965 and did not recommend the award of any medals for the Jadotville action. This was at a time that the events in the Congo were seen as an abject failure by the UN at diplomatic and military levels, i.e. ignoring the UN Peace Keeping mandate and move towards Peace Enforcement with its tragic consequences. Resulting from this mindset everything about the Congo in 1961 was “swept under the carpet” and the recommendations for medals for a handful of “A” Coy members was ignored as a result.  This was indeed unfortunate as the Jadotville action is one that the Irish Army, the Irish Government and the Irish People can be justifiably proud of,” said Deputy Murphy. 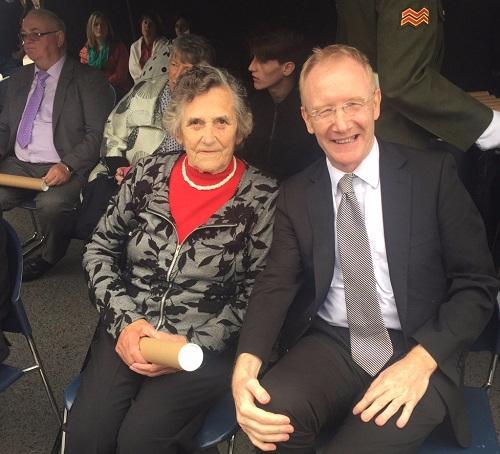