Concluding our highly popular series of articles by ‘Next Stop Who Knows’, Carlo and Florence this week tell viewers of ‘one of the most bizarre countries we’ve every visited.’

Last August we visited a country that doesn’t actually exist. That’s right – you won’t find it on any map. In fact, you’ve probably never even heard of it before. Confused? We were too!

Let’s tell you about Transnistria – one of the most bizarre ‘countries’ we’ve ever been to.

Where is it? Transnistria is a thin strip of land between Moldova and Ukraine and the ‘country’ is home to more than 500,000 people.

The history? Let’s roll things all the way back to 1990. Moldova broke away from the Soviet Union and declared its independence. Transnistria – which was then a part of the newly formed country of Moldova – was home to many Russians and Russian speakers who felt totally isolated in the new republic. They declared independence from Moldova and wanted to be part of the Soviet Union again.

Today, the ‘country’ is still fighting for its independence and has its own parliamentary government, a president, a standing army, and its own currency. It’s got a constitution, a flag, a coat of arms and residents are issued Transnistrian ID cards.

Essentially, it has everything an independent nation should have but it’s still not recognised as a ‘real’ country.

Does anyone recognise Transnistria as a country? Only Abkhazia, Artsakh, and South Ossetia do – all of these are other non-recognised states. All other countries, including the UN, see the region to be part of Moldova.

So what was it like in the capital city of Tiraspol and why did we want to visit?

Imagine a city where time literally stands still. A city that takes visitors back in time to the USSR. A city with huge public squares, wide streets and statues of Lenin on almost every corner. Imagine a capital city with no shopping centres, no Starbucks and no Mc Donalds. Imagine a divided nation where half the population wants to be part of Russia and the other half want to be part of Moldova and the European Union.

Imagine all of that and you’ll get a good indication of what life is like in Tiraspol and Transnistria.

We didn’t want to visit to see a famous landmark or climb a well-known mountain. Curiosity got the better of us and, after hearing about Transnistria in a documentary for the first time back in 2018; we wanted to experience what life was like there for ourselves.

In one word – weird!

We definitely stood out, as tourism is definitely not mainstream in Transnistria. People stared at us and we got the impression that they were wondering “what brings them here?” That said; they were friendly and welcoming.

We spoke with Anna, a 21 year old who felt trapped and isolated. She had plans to move far away from Transnistria as she believed the future was bleak for the younger generation. We also chatted with locals who worship Stalin and Lenin and would love to see the return of the Soviet Union. They believe that life was better under Soviet rule (more organization, better roads etc.)

We left with a feeling of sadness for the locals as it’s a divided nation. There isn’t much in the way of employment or development and, by all accounts, it really did feel like a modern communist country.

It was weird to walk into the giftshop on the main street and see mugs and posters with Lenin, Stalin and Putin’s faces. Imagine walking into Una Bhan and seeing that instead of the lovely hand-knitted jumpers, magnets and jewellery!

People often ask us “what’s the weirdest country ye have ever visited?”

Transnistria is definitely up there so if you feel like a trip with a difference when travel resumes to ‘normal’, why not put it on your list?!

Here’s a link to a highlight video of our time in Tiraspol; 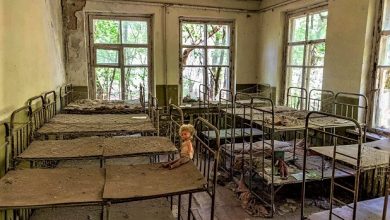 The thrill of the world’s biggest water fight