A Boyle native, now resident in Tuam, Co. Galway was presented last night with the Tuam Person of the Year 2014 award.

Ann Coen (nee Smith) was presented with her award at a gala ceremony in Tuam Town Hotel for her work with Tuam Trad Fest which is a traditional music festival that commenced in 2009.

Ann was joined by her husband Bernie, son Brian and family members to celebrate the occasion. Her daughter Derbhna was unable to attend as she is out of the country.

Ann is daughter of the late Mike and Rita Smith formerly of St. Patrick Street and Carrick Road and is a regular visitor to her home town from where best wishes are extended to Ann on the great honour bestowed on her last night.

(Our photograph shows Person of the Year Ann Coen with Mayor of Tuam Imelda Kelly, her husband Bernard and son Brian. Her daughter Derbhna who is in the USA was not able to be present for the ceremony. Photo: Ray Ryan, The Tuam Herald) 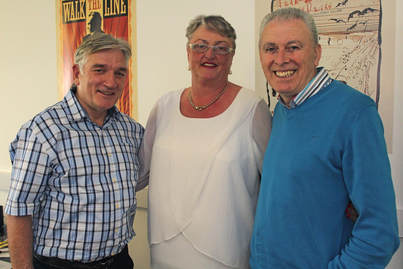 ‘Irish at Home & Abroad’ in Boyle

‘The Irish at Home & Abroad’ in Boyle