Another Boyle son makes it big

Older generations in Boyle will have fond memories of Lynch’s Hotel on Main Street where the Indian Restaurant is now located. The small hotel was run by Pat and Doireann Brady along with their children Marie and John. John now lives in Galway with his wife Siobhan Ni Ghadhra and their four young children. The couple, who were featured in last Sunday’s Independent, are co producers of popular TG4 series Ros na Run. Along with co producing the TV series, their production company Danu Media is in development stage with TG4 for a feature film and are looking to attract more international TV and film making productions to shoot in the West of Ireland. John has a wealth of experience of film and drama production having been involved with ITV, BBC, Disney, RTE and TG4. He also produced the IFTA award winning series”Aifric” and line produced “A date for Mad Mary”. No stranger to his home town, John and his sister Marie are regular visitors to Boyle and spend time with family friends in the town on a regular basis.

Free parking must be preserved in Boyle

An interesting observation was made by a number of attendees at a conference in Boyle this week. The Creative Exchange conference in the Spool Factory on Tuesday was organised by the Western Development Commission and attended by a larger number of people from all over the West of Ireland. The first question the majority asked was “where do I pay for parking?”. On being informed that on street parking was free and that town centre car parks were also free, there was a mixed look of shock and delight on the visitors faces. Free parking is an add on every business in Boyle should promote in marketing material and it is something we must preserve at all costs. In addition, business owners and staff need to park in the town’s car parks and off street areas, especially in the run up to Christmas, leaving the streets free for shoppers and visitors alike. Not too many towns have the luxury of free parking so let’s use it to our advantage.

Tralee in Co. Kerry followed in Boyle’s footsteps on Wednesday night and was named the Bank of Ireland Most Enterprising Town for 2017. This time last year it was Boyle’s turn, to first win the county award, and then win the overall award. In what has been a quick year, the town has progressed on the strength of the accolade and sown the seeds for future development that will become evident over the next few years. In the run up to judging for the 2017 awards, the assistance and advice from Boyle Town Team, (who were the lead group in winning the 2016 title), was sought by 17 towns throughout the length and breadth of the country. How we showcased all we have in Boyle was seen as the role model by other towns who sought to claim the coveted title that Boyle was the first town in Ireland to ever win.

The new lighting at the entrance to the Boyle VTOS Education Centre, or “The Tech” to those of an older generation, has made a huge difference in bringing the venue to the attention of the public. The lights were recently installed at the entrance from the Marian Shrine and they guide ones eye to the building as you leave town. A number of courses are run in the Centre that is also home to Abbey Community College PLC classes.

A hotel on the Royal site would be too costly

It has been suggested this week that 60% of the submissions received so far by Roscommon Co Co want a new hotel on the site of the former Royal Hotel in Boyle. While it is understandable that we are “hotel starved” in Boyle, in reality, a hotel on this site is not going to happen and perhaps those who submitted that notion have not taken into account the information supplied by the Council in the request for submissions. Over half the Royal Site is sitting on a Flood Zone, as set out in the Strategic Flood Risk Assessment. Fact. And Roscommon Co Co may only give permission for a hotel on that site if stringent planning conditions are met which would include a flood risk assessment and extensive flood defence systems. To build a hotel on the former Royal site and meet the required criteria would be cost prohibitive. If you are waiting until today’s deadline to submit your idea, please take into account the submission request for a “practical, constructive and sustainable solution for the future use of this site”.

An Irish doctor wanted to get off work and go golfing, so he approached his young assistant.
“Tommy, I am going golfing tomorrow. I don’t want to close the clinic. I want you to take care of the clinic and take care of my patients.”
“Yes, sir!” answers Tommy.
The doctor went golfing and returned the following day and asks: ”So, Tommy, how was your day?”
Tommy told him that he took care of three patients. “The first one had a headache so I gave him Tylenol.”
“Bravo, and the second one?” asked the doctor.
“The second one had stomach burning and I gave him Maalox, sir.” said Tommy.
“Bravo, bravo! You’re good at this and what about the third one?” asked the doctor.
“Sir, I was sitting here and suddenly the door opened and a woman entered.
Like a flame, she undressed herself, taking off everything and lay down on the table and shouted: “HELP ME! For five years I have not seen any man!”
“Good Lord, Tommy what did you do?!” asked the doctor nervously.
“I put drops in her eyes.”

An Tanaiste visits Boyle for a number of engagements 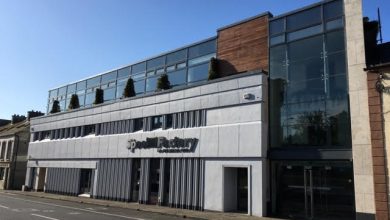 Contract signed for new development at the Spool Factory