The proverbial game of two halves was certainly the case today with Strokestown dominating the first half and Abbey College the second. However, the outstanding individual performance of Daire Cregg who shot 1-9 was to be the ultimate difference between the sides and Abbey College prevailed to win the cup by two points.

Strokestown won the toss and elected to play with the aid of the breeze in the first half. They also decided to deploy their wing forward C. Neary as a sweeper in front of the dangerous Daire Cregg. Although Boyle opened the scoring in the 2nd minute with a free from Cregg it would be the 17th minute before they would register their next score as Strokestown totally dominated the half. Following their first score by R. Kelly in the fifth minute they followed this up with scores in the 8th, 9th, 10 and 11th minute to open up a 5-1 lead. Although Cregg replied from play, Boyle struggled greatly to win their own kick out and the incessant pressure amounted to another five scores in row for Strokestown between the 18th and 22nd minute leaving 7 points between the sides. At this stage, the Boyle players just needed to get their hands on some ball and the switching of the full forward line and half-forward line seemed to have the desired effect. Cathal Feely had started to dominate midfield and with Luke McGrath, James Kiernan and Oisin Cregg now running at the Strokestown defence things improved for the north Roscommon School. A high ball into the Strokestown square on the 29th minute lead to a penalty for a foul off the ball. Daire dispatched the penalty perfectly to the bottom corner of the net and gave Boyle a massive lifeline leaving the half time score Abbey College Boyle 1-2 v Strokestown 0-9.

Whatever was said in the Boyle dressing room at half time, coupled with some tactical changes, certainly had the desired effect as the Abbey College lads powered into the 2nd half like men possessed. Daire had a point from play in the 31st minute and from the resulting kick out Feely had it caught and passed to Daire, who slotted it over the bar, before the keeper had time to collect his kick out cone. Abbey College were now dominating all over the field with Daniel Casey, David Flanagan and Kealan Wright dominating their men in the full back line. Oisin Sheerin had powered into the game from midfield and Kevin Byrne was playing the sweeper role to perfection. Oisin Cregg was doing an excellent job breaking up any Strokestown attacks and Cathal Feely was putting in a towering display in midfield. This dominance showed on the scoreboard and from the 34th to 47th minute Daire had a further 5 points (1f) scored to give Abbey College the lead on a score line of 1-9 v 0-9. However, Strokestown would not good down without a fight and L. Galvin scored a free in the 51st minute. It would be the 54th minute before we would see the next score but it was one worth waiting for when Feely went on another one of his trademark runs and slotted the ball over the bar with his trusty left foot. From the resulting kick out Tomas Demeter plucked the ball from the clouds, hand passed it to the on rushing Finn Bruen who was having an outstanding second half. He placed a lovely ball to Eoin Connolly who moved it quickly to McGrath who popped it over the bar to put 4 between the sides with only 5 minutes of normal time remaining.

However, this game was far from over. Some poor wides by both sides meant there was still 4 between the sides as we entered the 64TH minute. A short kick out from McKeon in the Abbey goal went to Casey, he gathered it but as he went to turn, he slipped and the ball fell from his grasp. Shane McGinley had it picked up in a flash and hit a fine shot to the back of the net. Only a one-point game and now the pressure was really on. McKeon however doesn’t do pressure and this time he elected to go long and yet again the dependable Feely rose highest with an excellent catch. He moved the ball quickly to James Doherty O Brien who found the excellent Niall O Donnell with a beautiful foot pass. O’ Donnell slipped passed the Strokestown defender and hand passed it to the on rushing Oisin Cregg who powered into the Strokestown defence and slotted a beauty over the bar with his left foot. From the resulting kick out the ref blew the final whistle and the Abbey College players could finally celebrate an outstanding win in an excellent hard fought encounter. 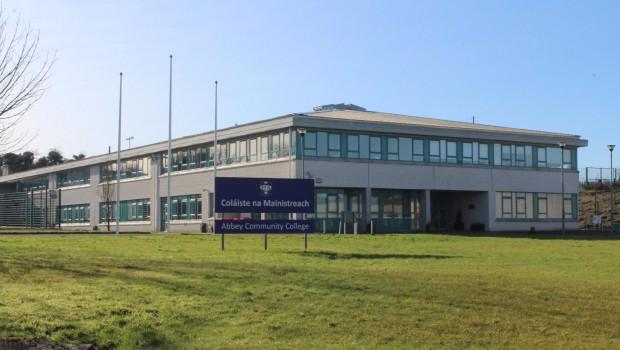 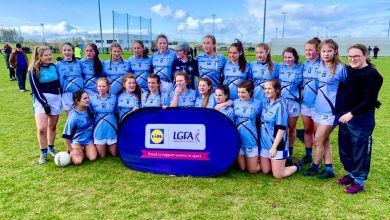