RESULTS – Mark O’Donohoe was the winner of the Mens 18 hole Stableford played on the weekend of Sunday the 24th of July. Mark had 38 points, second place went to Sean Purcell’s 35 and Colin O’Sullivan had 34 for 3rd.
The midweek competition held on Thursday the 28th was won by Shane O’Dowd with 29 points, Liam Whyte was second and Owen Garvin third, both with 28 points. The 2s club was shared by Paul Brown and Owen Garvin.

CAPTAIN’S PRIZE – Next Sunday the 7th of August is the date for the biggest competition of the golfing year in our club, the Captain’s Prize. The Mens’ Captain this year is Gabriel Lavin. There will be a
Captain’s Scramble on Friday evening, open to all members with names to be in for the draw at 6, with shotgun start at 6.30. All members are welcome to play in this competition. For the Captain’s Prize to the men on Sunday, the format will be the usual 18 hole Strokeplay with the players with the best scores returning for a 9 hole playoff in the evening with the presentation shortly after the end of the playoff. Players must have their membership ” in good standing” and have a valid handicap. There is no requirement this year to have played in a specified number of competitions prior to the Captain’s Prize.

VOLUNTEERS EVENING – There will be a volunteers evening this Wednesday at 6.30 to do some tidying up around the course prior to the Captain’s Prize. It would be great to have a good turn out for our Captain. Please bring equipment if you have some, e.g strimmer, brush etc. 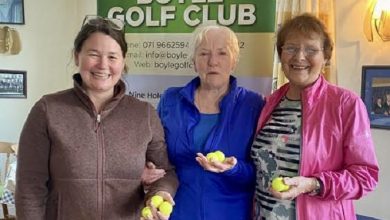