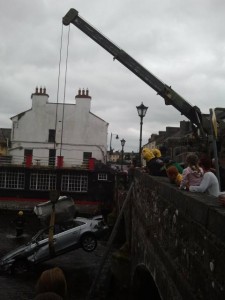 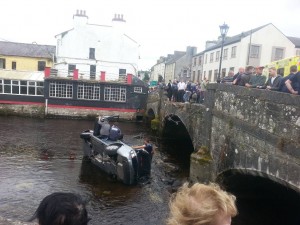 A major emergency operation swung into action in Boyle this afternoon when a Sligo registered Audi car with two elderly passengers crashed through the Scanlon’s/Royal Hotel side of the town bridge and ended up in the Boyle river.

Local people who were first on the scene went to the couples rescue while Boyle Fire Brigade, Gardai and the ambulance service from the Plunkett Home base were quickly on the scene.

The couple were cut free from the wreckage by Fire Brigade personnel before being removed to Sligo General Hospital by ambulance where their condition is being described as non life threatening.

The rescue operation then moved to one of recovery as the stricken vehicle was removed by crane.

Diversions remained in place for the operation.