The Mulligan Sisters and their piano accompanist Pádhraic Ó Cúinneagáin are in concert on Saturday evening, 28th May 8:00 pm at King House, Boyle.

The Mulligan Sisters are from Aughnacliffe, Co. Longford. The sisters have been singing together since the age of four. Mary is a Mezzo Soprano and plays the Irish tin-whistle while Aideen is a Soprano and plays the Irish harp. Together they have the blend of harmonies that can only be achieved by two sisters. The Irish flavour through their music gives a haunting and ethereal quality that is true to their roots. Their music is an exciting blend of Irish-Classical crossover. They sing songs ranging from powerful Operatic arias, to Musical Theatre right through to traditional songs of Ireland.

They studied singing in the London College of Music under vocal coach Soo Bee Lee and under Irene Sanford at The Royal Irish Academy and with Irish repetiteur Jeannie Reddin. They have performed in churches and theatres all over Ireland, New York (with Ronan Tynan- The Irish Tenors), Boston and Europe. They have sung at many notable functions including a concert in The Lincoln Centre, New York for a 9/11 commemoration with the NY Fire Department along with the New York Fire Department Pipe Band and New York Orchestra. 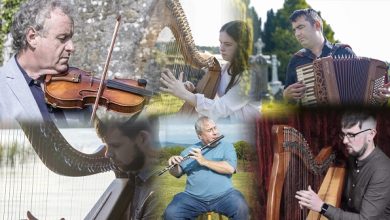