The recently released commercial vacancy figures for the country (see news section of this website) show that Boyle has something that we all know – a high number of empty commercial buildings. The GeoDirectory figure of 21.6% for Q2 2019 is a decrease on the corresponding period last year which is a positive statistic. It was interesting though how many media outlets who reported the figures forgot to say that Boyle had a decrease, instead honing in on the fact that at 22%, Boyle has a relatively high vacancy rate – a prime example of not looking for the positive in a story.
The various civic bodies and the local authority are acutely aware of the vacancy rate here in Boyle and are doing all they can to address it. When the initial €3m investment in the town starts to come on stream later this year you will most certainly see a further decrease in commercial vacancy rates in Boyle.

There are mixed views on the recently upgraded street lighting in Boyle. Some feel there is better light from the new bulbs while others think there is worse. The recent works included the upgrade of Decorative Heritage and 90W – 250W Public Lighting Lanterns throughout town with new Energy Efficient LED Lantern Technology. At the time, the company installing the new light bulbs said that the upgrade would provide substantial benefits for both the local community and the environment as “not only do the new LED Lanterns provide more aesthetically pleasing lighting output and colour; these upgrades will also reduce energy usage by up to 60% and CO2 output by over 28 tonnes per annum”. (See the weekly poll on main page)

You have to hand it to Una Bhan Tourism. Once again they are on the ball when it comes to promoting Boyle and this region as they host a food tourism networking event in the town next Monday evening. ‘Taste the Island’ is a Bord Failte initiative aimed at enhancing Ireland’s food and drink reputation and the Boyle event is one of the first under the banner to be held locally. There are a number of guest speakers attending in addition to a showcase of what some producers and suppliers have available locally. If you are in the food, drink or tourism related business in Boyle or surrounding area, then please attend this event. Number are limited with pre registration is available now on 071 9663033 or [email protected]

Welcome for work on Main Street

It was great to see the scaffolding being erected on Main Street in Boyle on Thursday morning as work commenced on the €140,000 regeneration of the south end of the street under the Historic Towns Initiative Scheme. Boyle Town Team and Roscommon Co Co were awarded the money last March to carry out the work. The south side of the street was chosen as the one most in need of regeneration and the one that is facing onto the Royal Building where work will commence before the end of the year. While €140k sounds like a lot of money, it will be used up very quickly but it could pave the way for further funding for the regeneration of the walkway at the rear of Main Street as outlined under Boyle 2040.

One of the great late season sporting events takes place in Boyle’s Lough Key Forest Park on Sunday when the annual Lough Key Triathlon takes to the road and water. As this year’s event is part of the National Series, there should be a strong field among the 500 or so competitors. The Triathlon is always a great spectacle and brings a large number of competitors and their families to the area. The Triathlon gets underway at 10.30am with prize giving scheduled for 1.15pm. It would be great to see a big local support for the athletes on Sunday as there will be many from Boyle taking part.

A grizzly bear walks into a bar and the barman asks ‘What will you have?’
‘A gin’ replies the bear.
The barman walks off and comes back with a gin and puts it down in front of him.
‘…….and tonic,’ finishes the bear.
‘What’s with the big pause?’ asks the barman.
The bear looks down and says ‘I don’t know, my Dad had them too.’ 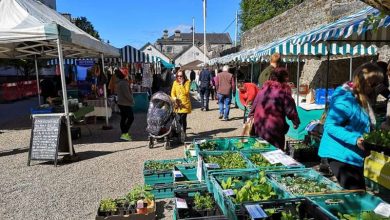