Could Sinkholes happen in Boyle?

The damage to the grounds of Magheracloone GAA Club and Community Centre in Carrickmacross this week by sinkholes could as easily happen in Boyle. While we do not have a mine in the town, what we do have is an array of tunnels or underground passageways beneath the town. It is said that these tunnels run from the Abbey to various locations including Assylinn. Indeed in the book the ‘Annals of Boyle’ reference is made to the ‘Assylinn Caves’ on the face of the hill looking down to what was once the swimming area in the river. It is said that this was the exit of the tunnel that runs parallel with the river from the Abbey. Many years ago some in Boyle may recall work on the roadway down by Scanlons/Kenny’s Bar. As an opening was made in the road, part of it subsided and a cavern or passageway was observed underneath. It was quickly closed up again! This may be the route of the tunnel from the Abbey to Assylinn, running along by Frybrook.

A far seeing and enterprising couple

The awards keep coming the way of Liam and Justina Gavin’s Drumanilra Farm Kitchen. On Tuesday last they received one of their most prestigious awards to date when they won the Georgina Campbell Natural Food Award in Dublin. In an interview with this website following the awards ceremony, Justina referred to their exciting plans the couple have for the Boyle restaurant and farm shop where they hope building will commence in 2019. The new facility will feature a larger and more comfortable cafe/restaurant area, more parking and more retail space including room for a fresh organic meat counter, organic vegetable offer, deli and organic bakery all on site. The enterprising couple also have plans to establish accommodation on their farm between Knockvicar and Corrigeenroe. The winning of all these awards along with features on TV, radio and national press are all helping Drumanilra Farm Kitchen to power ahead. We are very lucky in Boyle to have such far seeing people as Liam and Justina as members of our community as they continue to lead by example in their growing food and agri business.

Getting increased visitor number at our attractions

Boyle Abbey closed on Wednesday last for the 2018 season. It had been open since March 29th. With the tourist season now going later into autumn, there are many in the tourism business in Boyle who feel the Abbey should remain open until at least mid October. King House will also soon close it’s doors but at least you can book pre-arranged groups all year round in that facility. While 2018 visitor numbers for both attractions are not yet known, you can be sure they are nowhere near where they should be when one considers what both establishments have to offer and their proximity to the busy Lough Key Forest Park. Now is the time for a marketing plan to be put in place for the three Boyle attractions so visitor numbers can be increased in 2019 when hopefully parts of Boyle 2040 including the new Greenway are in place.

The annual report from the Tidy Town adjudicators, published here on Boyletoday.com last Tuesday, made for interesting reading. One sometimes wonders at the marking system that the adjudicators have in place. Boyle has gradually gained points over the years but not to the degree that it should considering the progress that has been made in improving the appearance of the town. The planting of areas around the Crescent and on the entrance to Boyle over the last few years did not gain the marks that it deserved. Other efforts by business owners and estates seemed to have gone unnoticed. It is understood Boyle’s judging takes place in June every year and unfortunately at that time all the planting and flower baskets around the town are not in full bloom. With work from Boyle 2040 due to commence this year and major changes planned for the town, hopefully next year will see Boyle go that bit further with the possibility of some form of accolade well within our reach.

Are the balloons going up?

The famous question that was asked in Boyle every September morning and evening in the late eighties was “Are the balloons going up?”. At that time Boyle was home to the annual Irish Hot Air Ballooning Championship. The event ran it’s course and due to high costs among other reasons, the balloonists moved from the area to pastures new. This week the Irish Ballooning Championships takes place at Birr Castle in County Offaly and runs from 23rd – 28th September. 40 teams are due to participate. While the championship moved from Boyle, perhaps it would be in order to organise a mini festival that could take place in autumn – maybe on the back of the national championships? No doubt the friendships that were forged between locals and the balloonists when they came to our town are still going strong and could be of benefit in getting a handful of balloons back to Boyel once again. Unfortunately time has taken its toll and some, like the affable Doug Anderson, who was known to many in Boyle may have gone to their eternal reward.

A young Army officer was severely wounded in the head by a grenade, but the only visible, permanent injury was that both of his ears were amputated.
Since his remaining hearing was sufficient, he remained in the Army.
Many years later he eventually rose to the rank of Major General. He was, however, very sensitive about his appearance.
One day the General was interviewing three servicemen who were candidates for his headquarters staff.
The first was a Captain, a tactical helicopter pilot and it was a great interview. At the end of the interview the General asked him “Do you notice anything different about me?” The young officer answered, “Why yes Sir, I couldn’t help but notice that you have no ears.” The General was displeased with his lack of tact and threw him out.
The second interview was with a Navy Lieutenant and he was even better.
The General then asked him the same question. “Do you notice anything different about me?” He replied sheepishly, “Well Sir, you have no ears.”
The General threw him out also.
The third interview was with an old Sergeant Major, an infantryman and staff trained NCO. He was smart, articulate, fit, looked sharp and seemed to know more than the two officers combined.
The General liked this guy and went ahead with the same question. “Do you notice anything different about me?”
To his surprise the Sergeant Major said, “Yes Sir, you wear contact lenses.”
The General was very impressed and thought, “What an incredibly observant NCO and he didn’t mention my ears.” He asked the Sergeant Major, “How do you know I wear contacts?”
“Well Sir”, the soldier replied, “It’s pretty hard to wear glasses with no bloody ears.” 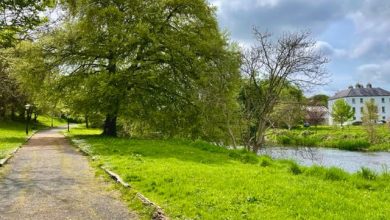 Planning for Boyle Boutique Hotel to lodge in New Year