CAPTAINS PRIZE 2018 – Well done to Brendan Gaffney who is the winner of the Captains Prize for 2018. Padraig O’Connell made a valiant effort to thwart Brendan’s attempt at a third Captains Prize, having been 3 shots behind him going into the 9 hole play off and closing the gap to 1.5 shots, but it was not to be. Brendan was presented with his prize by the captain, Terry Canning, in a presentation in the clubhouse on Sunday night. It was great to see both a strong turnout on the day and a number of new faces playing in their first Captains Prize.

MEN’S MIDWEEK COMPETITION – The winner of the men’s mid week competition on Thursday the 26th  was the evergreen Ted Hester. Ted employed his wealth of golfing experience to bring in a fine score of 28 points and thus become the appreciative owner of a bottle of Hennessy.

INTERCLUB – The men of Boyle Golf Club take on neighbours Ballaghaderreen on the Monday of the bank holiday weekend. The captain of the team this year is Lorcan Egan and he asks that anyone interested in being considered for selection to get in contact with him during the coming week. 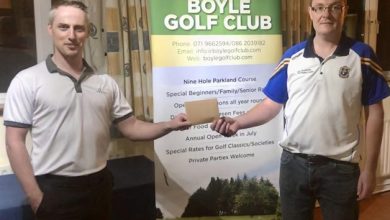