The club have 3 players participating in the Sigerson 3rd level competition with Daire Cregg and Cathal Feely in UCD while Luke Glennon is involved with DCU.

Good Luck to Roscommon and our club reps next Friday who play Kevin Mcstay’s Mayo in the final before the Division 1 league against Tyrone the flowing week.

Dinner Dance for 2022 in Kilronan Castle

We had our Dinner dance to celebrate a successful year in 2022 where we had a number of notable achievements. The Ladies team collecting their well-earned winners medals from the intermediate campaign and their return to Senior championship in 2023. The men’s Senior team collected their O’Rourke Cup medals for the league

Congratulations to Players of the years for the Senior & Junior men’s, Ladies and u20.

Congratulations to PJ Keane and Barry Feely on entering the Hall of Fame. PJ spoke of his welcoming received by his adopted club here in Boyle moving from Limerick in the 1970s as an Army officer. He spoke about his fondness for Boyle and the people he made great friends with in the town and surrounds. He also spoke humbly of how himself and Barry were part of the committee, who were pivotal, in the purchasing of the Abbey Park where we are today and how it was bought and paid for in the same year, which in any stretch of the imagination is an extraordinary accomplishment.

Barry gave us an insight into the street leagues , he used to play in and how he was happier to have PJ on his team for many reasons! Congratulations !

Apologies for leaving anyone out but special thanks to the dinner dance committee and special Guests for the night.

Special guests on the night were Patricia Beirne, Chairperson of the Roscommon LGFA and Brian Carroll Roscommon Co Chairman.

Thanks to Kilronan Castle for having us and doing a splendid job on hosting the event.

Finally, Thanks to the MC’s for the night, Laura Gannon and Steve Tonry. 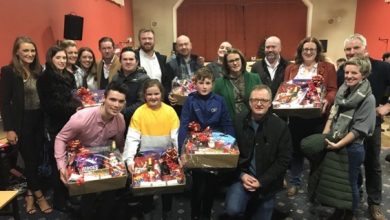