All roads lead to St Joseph’s Hall in Boyle on Friday June 30th for what will be a very enjoyable night for all Gaelic Football supporters. The ‘Road To Croker’ event brings together a range of household names in Gaelic Football for an evening that is not to be missed.

The Sunday Game pundits Joe Brolly and Martin Carney, two time All Ireland winning manager John O Mahony, former Dublin captain Collie Moran, Roscommon’s inimitable Shane Curran, leading GAA administrator John Prenty and former Galway stalwart Brian Talty will all bring a wealth of Gaelic Football knowledge and experience to St Joseph’s Hall in Boyle for what promises to be a very entertaining evening. Topics on the agenda will include championship formats, team preparation, the current state of the game and of course the upcoming provincial finals in all four provinces.

Speaking at the launch of the event, kindly sponsored by Cooney Motors, Boyle Kathleen Hanmore, Chairperson of Boyle GAA Club commented ‘‘We’re delighted to host this Gaelic Football forum and feel that this evening will yield invaluable insights into the game given the vast experience of our star- studded panel of speakers. Above all, we look forward to a wonderful night of entertainment. We are also very pleased to announce that a donation from our proceeds will be made to the Irish Kidney Association’.

In addition, somebody in the audience will end up on the road to croker themselves with the attractive raffle prize of an All-Ireland Football Final weekend in Dublin with two tickets for the final.

The Road to Croker – The Panel

Joe Brolly. A key member of Derry’s All Ireland Winning team of 1993, Joe Brolly also holds 4 National League medals and 2 All Star awards. A regular pundit on the Sunday Game, Joe is also a columnist with the Sunday Independent.

Shane Curran A holder of Connacht medals at club, minor, junior and senior levels, Shane was Roscommon captain when they won the All-Ireland Junior Football Championship in 2000. He was a key part of the 2013 St Brigid’s All Ireland winning team and more recently led Padraig Pearses’ to successive Roscommon County Finals.

Martin Carney Martin Carney played on the Donegal team that won its first Ulster title in 1972. Another Anglo Celt success followed in 1974, before Carney switched his allegiance to Mayo where he added four Connacht titles. Martin is now an analyst on The Sunday Game.

Collie Moran is a former Dublin footballer. He won 5 Leinster Senior medals, captaining the side in their successful provincial campaigns of 2006 and 2007. He also represented Ireland in the International Rules Series. More recently Collie has been coaching with Dublin development panels.

John O Mahony. A double All Ireland winning manager with Galway, John O Mahoney holds the unique distinction of having led three counties, Galway, Mayo and Leitrim to success in the Connacht Senior Football Championship. John is currently a member of the Leitrim senior team management.

John Prenty. One of the country’s leading GAA administrators, John is Secretary of the Connacht Council.  In his annual report for 2017, John concluded that many counties are ‘living beyond their means’ and suggested steps be taken to rein in spending on inter-county teams.

Brian Talty. A Galway stalwart of the nineteen eighties, Brian was a member of the Galway team that contested the now infamous 1983 All Ireland Final. Brian has been involved in coaching and managing Dublin club teams and was for a time a selector on the Dublin Senior Team. 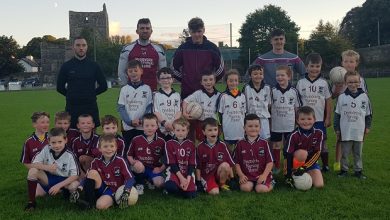