The Abbey with no tours

The news that Boyle Abbey will initially only have it’s grounds open to the public was met with shock locally during the week. Despite what some may think, this level of opening is commonplace in OPW heritage sites around the country as we exit level 5 lockdown. Clonmacnoise, Melifont Abbey and Parkes Castle all only have outside access at present. Hopefully, as we reopen further, tours will once again commence in Boyle Abbey.
The Abbey, along with King House and Lough Key Forest Park are our most famous tourist attractions. For this reason, and on the suggestion of Boyle Town Team, a three way ticketing service was introduced for the attractions a few years back, but when Covid hit – it went out the window. Perhaps now is the time to revisit this form of discount ticketing or if it is too late for the 2021 season, work should now be spent planning on it for 2022.

Even before restrictions were eased last Monday, inter county and non essential travel was still taking place. One only had to try and cross the Bridge Street junctions in Boyle at 9am or 5pm mid week to see that not everyone was working from home or not travelling outside their 5k. Here in Boyle, while the majority adhered to restrictions, it was necessary on occasion to travel on the N4 to neighboring Carrick on Shannon to purchase some items that were not available in Boyle, making that section of the road busy throughout restrictions. Transport Infrastructure Ireland’s traffic counter on the N4 between Boyle and Carrick is always a good barometer of movement and it shows that as expected, traffic numbers never really decreased. Last Monday (the day inter county travel was allowed) 6836 vehicles travelled on the road. For comparison, the previous Tuesday (Monday was a bank Holiday) 6702 vehicles travelled between the two towns, indicating that the ban on inter county travel really meant nothing in this neck of the woods.

Development Plan is your plan for the future

The Draft Development Plan for County Roscommon is currently at Stage Two and on public display (as per our news story on Wednesday). The document is important to each and everyone in the county as it will be used by Roscommon County Council to set out the overall strategy and vision for the proper planning and sustainable development of Roscommon over the 6-year plan period 2021 -2028. It also sets out development objectives for the area, such as plans to improve roads and local amenities and here in Boyle – how development can or can not take place in the environmentally sensitive area of Lough Key. Now is the time to study the plan and suggest any amendments. You can access the draft here

The amount of new businesses opening around town in recent times is most encouraging and it is understood there are a lot more to come. The majority of those opening are tourism related and people are now beginning to understand that the main industry in town going forward will be in the tourism area – living as we do in one of the most scenically beautiful parts of Ireland. Two businesses that have recently opened – Lough Key SUP and P Macs Kayaks are taking advantage of the great natural amenity we have on our doorstep – Lough Key. When everything opens up again there will be plenty of outdoor activity to keep both the tourist and local active – Stand Up Paddle Boarding and Kayaking in addition to Zipit and the Lough Key to Boyle Cycleway. These businesses in turn will lead to knock on opportunities for budding entrepreneurs.

A suggested new cycleway for our school children

A survey by the pupils in Scoil na nAingeal Naofa in Boyle on ‘Low Energy Day’ last week, and published here on Boyletoday.com, interestingly showed that nearly as many students walk to school as come by car. The bus is the third most popular mode of transport, followed by car pool and lastly – cycling. One has to wonder why cycling is the least common way of getting to school? Maybe it has to do with the dangers of being on a bike in an area with high volumes of traffic on what is a busy road. To encourage more students to cycle to school, perhaps a new cycle path from the town could be looked at. A natural cycle route could be constructed quite easily from the Church View area via St. Joseph’s Avenue to Scoil na nAingeal Naofa and on via the Church yard to St. Joseph’s BNS. There are pedestrian crossings in place already, so with the agreement of one or two land owners and with the funding that is currently available – a new cycle path like this would be a simple addition to getting children from Boyle town to cycle to the two largest schools in the town without having to deal with Christ the King and Shilling hill junctions.

If you are travelling on the N4 between Boyle and Carrick next week, be warned of delays. Roscommon Co Co say roadworks will take place on the N4 commencing Monday 17th– Friday 21st May from 8am-5pm daily. Traffic Management will be in place with traffic lights in operation and delays are to be expected.

A young doctor moved to a small community to replace one who was retiring.
The older doctor suggested that he should accompany him on his rounds.
At the first house a woman complains, “I’ve been a little sick in my stomach.”
The doctor says, “You’ve probably been overdoing the fresh fruit. Cut back on the amount and see if that works?”
As they left, the younger man said, “You didn’t even examine that woman, How did you know?”
“I dropped my stethoscope on the floor and when I bent over to pick it up, I noticed a dozen banana peels in the bin that was what probably was making her sick.”
The younger doctor said, “Very clever I’ll try that at the next house.”
At the next house, they spent several minutes talking with a younger woman.
She said that she just didn’t have the energy she once did saying, “I’m feeling run down lately.”
“You’ve probably been doing too much for the church,” the younger doctor told her.
“Perhaps you should cut back a bit and see if that helps.”
As they left, the older doctor said, “I know that woman well and she’s very active in the church, but how did you arrive at that?”
“I did what you did at the last house.
I dropped my stethoscope and when I bent down to retrieve it, I noticed the Priest under the bed.” 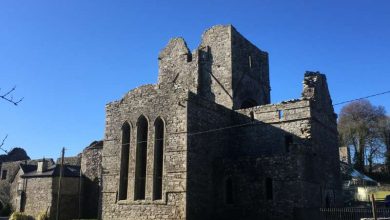 Boyle Abbey to reopen – with no guided tours available 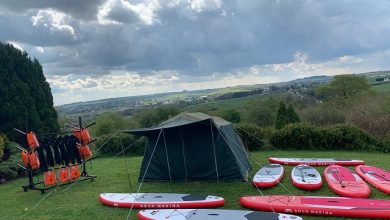