Without any fuss, the regeneration work at the Doon Shore has taken place and is nearing completion, with positive comments coming from young and old alike who made the most of the amenity during last weekend’s warm weather. Indeed the scene over the weekend was reminiscent of years gone by at Doon, with kids in swimming, parents keeping a watchful eye from their deck chairs and others having picnics or out on the water in canoes or other devices. €150,000 was granted under the Rural Regeneration Fund last March for the upgrade work at this amenity which included the creation of defined parking spaces to accommodate cars, trailers and users with disability, surface repairs to existing trafficked areas, an extension of the existing green space that provides a separation between vehicular traffic and pedestrians and the provision of a coloured pedestrian footway along the existing shoreline concrete structure. Cycle parking and a new plaza area with stone/concrete picnic facilities and benches have also been constructed. Like the Pleasure Grounds and Cycleway, the Doon Shore needs a maintenance programme put in place, as already, the coloured walkway is covered in sand and the grass is getting longer.

There was a great reaction to the piece we published last week here in the Boyle’d Pot on the Boyle Tunnels. One viewer who got in touch told us of another tunnel, supposedly running from the Railway to the Abbey. The viewer wrote: Just reading your article on the tunnels and one entry is at the railway bridge on Elphin Street, down along the railway line. You can crawl in and stand up when you get in a small bit. It supposedly leads all the way down to Boyle Abbey. Another viewer told us of seeing a tunnel on one occasion when work was being done on the garden of a house at the rear of Abbey Terrace. Another viewer got in touch to make us aware of a tunnel and a number of underground rooms that exist at Erris, just off Maple Drive. Has anyone any more sightings of any of these tunnels or openings? We hope to compile all the information we receive and pass it on, when we get some person or archaeology group that will take an interest in the project.

4am Knock flight visible over Boyle

Insomniacs or late night revelers may have seen a low flying aircraft over Boyle on Thursday night week and again Saturday night/ Sunday morning last as it made it’s decent into Ireland West Airport Knock. The plane passed over Boyle at 4000 feet at 4am on Sunday morning carrying over 100 friends of Conor McGregor as they made their way back from his 34th birthday celebrations in Ibiza. It seem MacGregor charted the Air Europa 737 to bring his friends for the 48 hour party and choose Knock as the airport of departure and landing.

Work on the upgrade of the front exterior of Boyle Garda Station is nearing completion with a new single storey glazed lobby extension, new paving and forecourt, new railings to forecourt boundary, new metal cladding to front elevation and side elevation, new Garda lantern and pole on the forecourt, with new plants and shrubs soon to be added. The development will really come into it’s own when fully completed and the landscaped work will compliment the soon to commence repaving of the current footpath from the Garda Station along by King House and down to and including the rear of Main Street. The official opening of the station, to include an Open Day will take place in late September.

Arts Festival was a great success

There was a brilliant atmosphere in Boyle all week for the Arts Festival, with the good weather of last weekend allowing the many visitors and locals alike to avail of the opportunity to dine outdoors before the evening events commenced. Passing by ‘Lovage at the Gatelodge’ on Friday and Saturday evening last looked like a scene from the continent as the warm weather drew many to the popular cafe/restaurant to sit by the river and enjoy good food, wine and company. There most certainly was something for everyone this year at the Festival and full credit to all the organisers who put in such hard work to make the week possible. All who attended events spoke highly of the Festival and how well it was run, bringing a welcome boost to the town with an evident number of ‘new faces’ (and some old familiar faces), visible all week around Boyle.

Minister for Rural Affairs Heather Humphreys paid another visit to Boyle on Tuesday last when she officially launched the ‘Energising Boyle Town Centre’ project. While funding from the Ministers department has already been secured for this work, the project is now going through the pain stakingly slow, preliminary stages before construction can begin, which most likely will be early in the New Year. The work will see the provision of redesigned paved areas along Bridge Street and Shop Street to improve pedestrian infrastructure along with new surfaces, lighting, hard and soft landscaping and street furniture in this town centre area, redesign of the existing public car park adjacent to the Post Office to address existing car parking arrangements and provision of a newly designed car park for safer pedestrian and traffic movement and improved landscaping and surfacing to enhance the visual amenity of this area along with all other site and ancillary works associated with the above. Investment will also be made in the facilities and attractions at King House. Viewers will recall that that Crescent area was to be included in this project, but was omitted, following disquiet among some people at certain elements of the plan including the loss of some car parking spaces on the Crescent.
Anytime a Government Minister visits Boyle is a good day, especially a Minister like Heather Humphreys who has a great interest in rural development and seeing small towns like Boyle prosper once again. Minister Humphreys said on Tuesday she had great belief in Boyle and what it can achieve. This is born out by the large amount of money her department has invested in the infrastructure projects that are currently underway and coming on stream in the town in the next short while.

Peace Pilgrimage stop off in Boyle

A big Boyle welcome is extended once again to the members of the annual Down and Conor Cursillo Peace Pilgrimage that will stop off in Boyle this evening Friday 22nd July. The group are expected to arrive in time for 7.30pm Mass in St. Joseph’s Church. As has been the case for the last number of years, the group will stay in the town with various host families.

A heavy gambler at the races had lost every bet. Then he noticed a Priest step onto the track and bless one of the horses before a race. Lo and behold the horse won.
Next race the Priest stepped onto the track and blessed one of the horses. The gambler dashed for a window and placed a bet on the horse. Even though it was a long shot, the horse won the race.
He collected his winnings and waited to see which horse the Priest would bless next. He bet big and it won. As the races continued the Priest kept blessing long shots which all won.
The gambler made a dash to the ATM, withdrew everything and waited for the Priest’s blessing to tell him which horse to bet on. The Priest stepped onto the track and blessed an old nag that was the longest shot of the day. The Priest blessed the eyes, ears and hooves of the horse.
The gambler bet every penny he had. He watched dumbfounded as the horse came last. In a state of shock, he went to the Priest and said ‘Father! What happened? All day you blessed horses and they won. Then in the last race, the horse you blessed came last. Now I’ve lost everything’.
The Priest nodded and said. ‘Son that’s the problem with not attending Church, You can’t tell the difference between a blessing and last rites’. 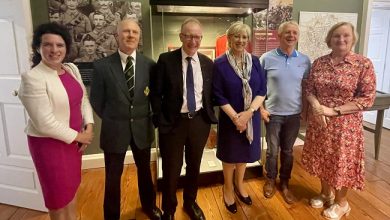